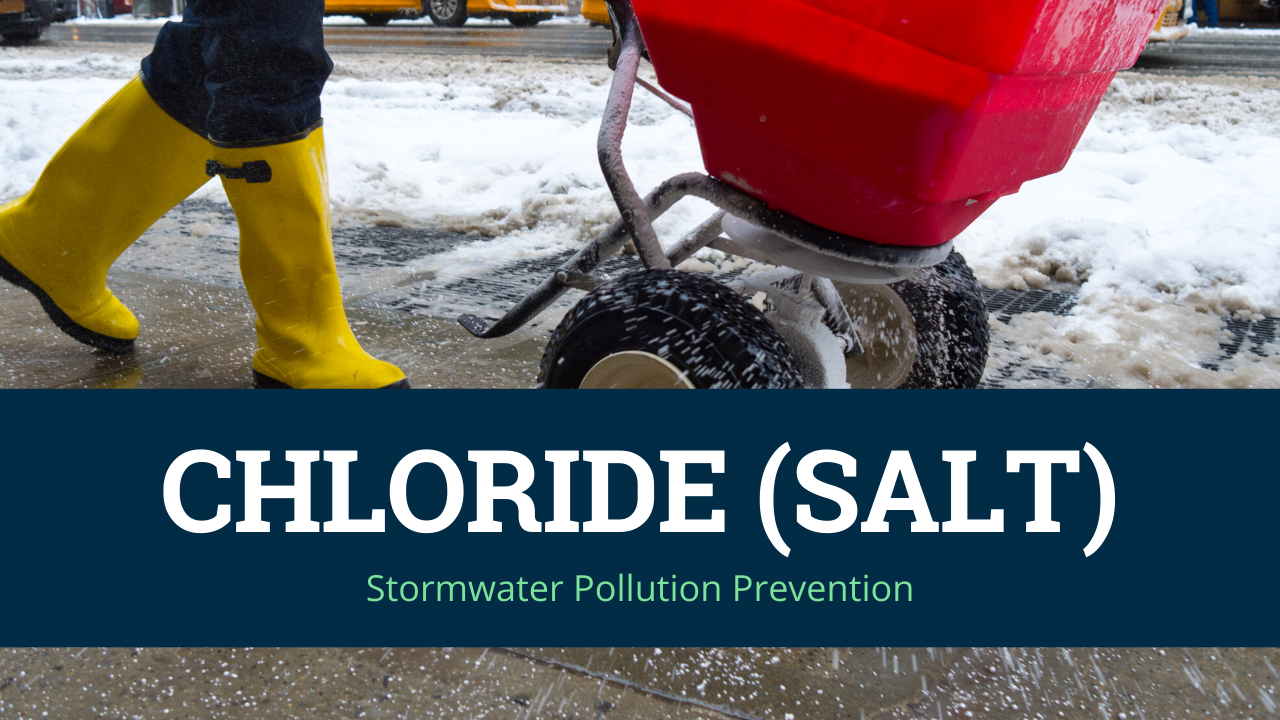 We get it. We don't want to slip and fall down in the winter either. But we also don't want to permanently pollute our lakes and streams with winter salt.

Every time it rains or snows, our streets and sidewalks behave like streams, carrying anything in its path to local lakes and rivers via storm drains and ditches - including road salt! Learn how you can protect your favorite swimming hole and fishing spot from salt pollution this winter, and all year round.

There is no denying that salt makes food taste better, but no one likes salt in their drinking water. According to the Minnesota Pollution Control Agency (MPCA), salt concentrations are rising in lakes, streams, wetlands, soil, and the groundwater that many rely on for drinking. But, how did all this salt get into our freshwater?

There are two main sources from which chloride (salt) gets into our water sources: from our homes and off our roads.

In our homes, salt is used to soften water so water heaters work more efficiently and soap lathers more. When used water from our homes flows to the municipal wastewater treatment plant, they are unable to separate the salt from the water before it flows back into a lake or stream. See, once dissolved in water, salt is costly and extremely difficult to remove. There are no natural processes that will remove salt from our freshwater, and water treatment plants aren’t designed to do so.

Come springtime with the snowmelt, a season’s worth of salt flows into our freshwater lakes, rivers, and streams. It is bad news for our water sources, as there is no easy way to remove this pollutant from our water and environment; once dissolved in water salt may appear invisible, but never goes away.

💧Salt pollution by the numbers

Each year, billions of pounds of salt is spread to combat icy winter conditions. It only takes one tablespoon of salt to permanently contaminate five gallons of water. Increase the amount to a 50-pound bag of salt, that’d pollute 10,000 gallons of precious freshwater. We've applied tons and tons of salt for over six decades - just imagine how many gallons of water we've polluted since then!

💧How does chloride impact our water and environment?

Chloride, a component of road salt, has a negative impact on wildlife and the quality of our drinking water. Salt concentrations in drinking water are on the rise, and this impacts the taste and healthiness of water.

For freshwater aquatic life, salt is extremely toxic. Fish, water bugs, amphibians, and other wildlife that live in and around our waterways suffer from salty water. Even at low concentrations, chloride is a toxic problem for ecosystems.

In lakes and streams, salty runoff often sinks to the bottom of the water. This salty layer blocks oxygen and other gasses from mixing with the water above, creating a low-oxygen environment that makes it hard for fish and other aquatic life to live and breathe.

Even plants and trees have a hard time living in salty conditions. Along roads and sidewalks, excess road salt leaves salt burns and scars that mark where vegetation can no longer grow. Salt spray from fast moving vehicles can even hurt trees, bushes, and other plants that are a ways from the roadside.

The soil is negatively affected by salt too! Salty soil loses its ability to hold water, store nutrients, and resist erosion.

Chloride is also corrosive to pipes, roads, bridges, cars, and other expensive infrastructure.

Last but not least, road salt can hurt your pets! If ingested by licking salt off paws or drinking contaminated water or snowmelt, your pet can get very sick. Chloride can also burn and irritate their toe pads.

How To Help: Use Less & Salt Smart!

Protect local lakes and streams by using the least amount of salt possible. Just one teaspoon of salt will permanently pollute 5 gallons of water!

Before salting this winter, shovel first! Less snow means less ice, and less salt. Scatter smart, aim for about three inches between salt grains. Switch to a different deicer, when the temperature is too cold for salt to work. Last but not least, sweep up and save any extra salt or sand to be used again. Following these smart salting techniques will save you time and money, as well as saving our aquatic ecosystems from pollution.

💧Is there a better alternative to using salt as a de-icer?

It’s complicated! While there are a few alternatives to using road salt, some are much more expensive and need testing. In an effort to protect Lake Superior and surrounding waters from chloride pollution, researches are looking into using potassium acetate on Duluth roads instead. Read about it here: Finding alternatives to road salt as water contamination grows

Sand is often used as an alternative to salt for traction, or used in combination with road salt. Unfortunately, leftover sand creates environmental problems of its own. Some states have even suggested food-based alternatives, such as using cheese or pickle brine, and beet juice molasses. An environmentally friendly option for creating traction on sidewalks and driveways is bird seed!

A great way to use less salt and prevent ice build-up is to apply a small amount of liquid de-icer before the storm hits. Follow this salt brine recipe to save you time, money, and your local waterways from permanent chloride pollution.

💧What can we do at home to prevent pollution of our favorite swimming lakes & fishing streams?

The best thing we can do to protect our water and environment from salt pollution is by limiting the amount of salt we add to the environment! When applying salt this winter, follow these smart salting tips. Watch our videos on smart salting here:

For more, visit: Snow removal: Do it better, cheaper and pollution-free!